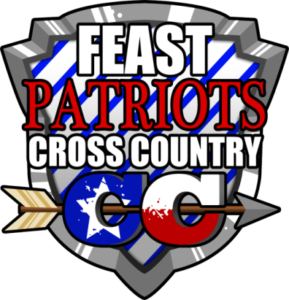 I hope everyone is doing well during this crazy time of uncertainty. Praise the Lord we can have faith and trust in God’s timing and leading because He loves us! Proverbs 3:5-6.

I would like to invite you to learn about the 2020 FEAST Patriot Cross Country Team. If anyone is interested in Cross Country and summer running please email Mark Jones. Send me your email and contact information and names and ages of runners interested. I will add you to my Cross Country email distribution list. This summer will only be open to FEAST runners and by Coach Jones invitation only!

I want to keep everyone updated on Summer Running Camps (click here for info) and activities if and when we are able to meet and run together again. I will also send out articles to help you learn and hopefully motivate you to keep up your running, muscle fitness, hydration, and nutrition this summer.
“Great cross country teams and runners are built in the summer months of June and July, not in October!

If God wills, I look forward to another fun and exciting summer and Cross Country season!!”

“The Lord is my strength and my shield;
My heart trusted in Him, and I am helped;
Therefore my heart greatly rejoices,
And with my song I will praise Him.” Psalm 28:7

Wow! What a season! Filled with miles, PRs, and state titles!

The FEAST Patriot Cross-country team is praising God for all the successes this season! God is so good! The Middle schoolers capped off the season at the ISAL Championship and killed it! Everyone ran great and it was so encouraging to see all the improvement! The middle school girls took home first place, with top finishes by Enola Mangelson, Gabbi Smith, and Suraiya Anderson! Way to go, girls, FEAST is so proud of all your hard work and dedication!

The team closed their season with an end of season fellowship, held at Coach Jones’ neighborhood pool. The team enjoyed conversation, playground fun, and basketball! Some brave runners even took on the challenge of the Annual Polar Bear Plunge, in the freezing weather! What brave souls these runners are! The team enjoyed Coach Jones’ encouragement at the fellowship and are very grateful God has put it on his heart to serve FEAST Families! From all the cross-country runners, “We love you, Coach Jones!”

What’s next for the Patriots? Well, some of the varsity runners are gearing up for an adventure to the Woodlands, where they will be competing at Nike XC South! The boy bunch consists of Woody Bratcher, Keagan Bogart, Joshua Powers, and Kiran Anderson. The girl gang attending is Lauren Bettencourt and KayCee Keller! The athletes would really appreciate your prayers for safe travel and fast times!  The final run of the season will be in Charlotte, North Carolina, at Footlocker South Regional! Lauren Bettencourt and KayCee Keller will be attending and are looking forward to pushing their limits one last time in their junior cross-country season! Lauren and KayCee have asked for prayers over safe flights, fun times, and fast feet!

Miles and Smiles
By: KayCee Keller

“You will never know your limits until you push yourself to them!”

The FEAST Patriots have pushed themselves past the pain in every race and workout this season, and it showed at the 2019 Texas Homeschool
State CC Championships! The meet was held on October 12th in Round Rock, Texas. The FEAST Patriots swept the meet by placing first in seven out of eight divisions! The mighty Patriots had a total of 22 top 10 finishes! Outstanding job to all the Patriots that competed at the 2019 Texas Homeschool State CC Championships!

The young middle school Patriots still have one last go-around at the ISAL Middle School Cross Country Championships on October 24th on their home turf, Live Oak Park. At this meet, the Patriot runners have a chance to run against some of the best middle schoolers in the San Antonio area, and they are going to do amazing things! Good luck to all competing, you will be in our prayers!

Several of the FEAST Varsity boys and girls have one last race as well! On November 23rd the participating athletes will be heading up to the Woodlands to compete at Nike XC Regional South! This meet consists of the best runners in the Southern United States!  Please pray for safety as they train hard, safety as they drive up, and safe, happy races on race day!

The FEAST Patriots have had an amazing season with lots of miles and smiles; the team can’t wait to see what God has in store for the upcoming track season!

Now with some amazing performances under their belts the passionate Patriots are gearing up for the Texas Homeschool State CC Championship on October 12th in Round Rock, Texas, at the beautiful Settlers Park! After state, the middle schoolers will have one last fight to the finish at the ISAL District Championship on October 24th! The team would very much appreciate your prayers as they work to finish the season strong!

ENDURANCE TILL THE END
By: KayCee Keller

“Therefore, since we also have such a great cloud of witnesses surrounding us, let us lay aside every weight and the sin that so easily ensnares us. Let us run with endurance the race that lies before us.”  (Hebrews 12:1)

It’s that time again! All summer the FEAST cross-country athletes have laid aside the weight of laziness and pushed through some scorching Texas miles. All in a hope to have endurance through the season that lies before them! The season officially kicked off on July 30th at Live Oak Park, with one of Coach Jones’ devotions and workout.
The next milestone for the athletes took place at River City Community Church on August 8th, it was the annual Red, White, and Blue Chocolate Milk Fun Run! This event, although fun, is no easy feat. The Patriots run their heart out trying to get a quality two-mile or onemile time to start off their season. If they endure to the finish, snacks and a runner’s staple (a.k.a. chocolate milk) are waiting for them! The team also enjoys a costume contest to see who are the most festive Patriots!
On August 17th, the team will be attending their first meet located at Steele High School.  It would be much appreciated if you keep them in your prayers, as they mentally and physically prepare to tear up the course and glorify God as they run! This year is going to be a good season!